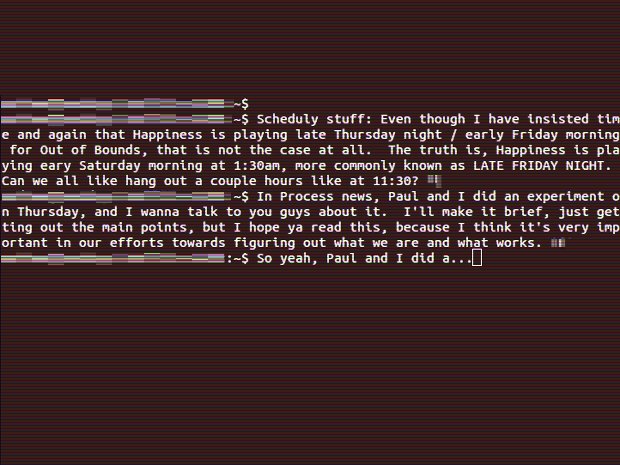 Scheduley stuff: Even though I have insisted time and again that Happiness is playing late Thursday night/early Friday morning for Out of Bounds, that is not the case at all.

The truth is, Happiness is playing early Saturday morning at 1:30am, more commonly known as LATE FRIDAY NIGHT. Can we all like hang out a couple hours like at 11:30?

In Process news, Paul and I did an experiment on Thursday, and I wanna talk to you guys about it. I’ll make it brief, just getting out the main points, but I hope ya read this, because I think it’s very important in our efforts towards figuring out what we are and what works.

So yeah, Paul and I did a Block Party at The New Movement, and something really neat happened: they let us play a full 22 minutes! That’s a full 4 minutes longer than our Happiness is a Choice in the Dark experiment!

So here’s the main points, numbered:

2. I think the main reason it worked so well was because we took what we learned (and what we all talked about) from the Darkness show and used it to full effect. In other words, good on all of us for giving each other great and useful notes after the Darkness show.

3. But wait! Everybody should know that I listened to In The Dark the other night, and I think it was really fun! I think it was another example of us just keeping things on the lighter side without delving very much into Deep Truth, and the fact is, we all decided a long time ago that Happiness can totally fucking do that if we want, and there’s no way we deserve to be hard on ourselves if we end up with a light and fluffy experiment. Also, that’s in accordance with one of the sweetest principles we ever devised, which is Whatever The Fuck.

4. But here’s what me and Paul learned in Experiment 12: It’s this simple– in order to engage the method on stage, you have to actually put your strongest foot forward and reveal exactly what’s going on in your heart/mind/body situation. What I learned is that it’s not easy to do when you’re on stage in front of people, because we’re all funny and smart and entertaining fellows, and we have a natural compulsion to entertain. But the critical paradox is that, the more courageous we are towards revealing our (mental and performance) process on stage, the more entertaining and engaging and original we are.

Before I start to sound too pretentious for my own good, let me clarify this… Revealing our heart/mind/body situation can be silly and facetious and absurd JUST as easily as it can be tense and dark and revelatory. The important trick is, we need to be listening to our hearts every single second of an experiment, because as soon as our hearts start to feel blocked, or scrunchy, or weird, we should, as practitioners of this method, call out that feeling and explain/explore it with everyone so that we’re all seeing eye to eye and understanding each others’ perspectives. What I’ve learned is that, if that process is drawn out to its fullest (even if it means that the entire 20-minute experiment boils down to just trying to do one single scene/exercise in a way that is satisfying to all of us), that is when the audience is most engaged with and in tune with us, and it’s also when Happiness is really handling Hapmat– Happiness Material.

Okay, that’s all for now. Experiment 12 was audio-recorded and video recorded, so hopefully it’ll be on our website and we’ll all have an opportunity to check it out soon.

i want to see the whole show, but just from the clip i can see what you’re talking about, Jeff.

in the vein of full disclosure and honest communication, i have this to say:

“i will not be happy if our OOB show is light and fluffy. I want it to be deep and meaningful. No matter what.”
-Jon Clinkenbeard

That said, if we still have a light show that is good, i suppose that is ok, but i will not be truly happy with it, because deep down, i’m choosing not to be. and that choice is a choice i’m making consciously, although i’ve apparently already made it unconsciously without knowing it, until now, when i realized it.

i think we should get together pretty soon. maybe one of those “hang out at Mike’s” nights.

i am happy with us. sometimes i love us.

Clink, what you said, I am so happy to hear. I totally get what you’re saying about choosing, ahead of time, to feel unhappy with an experiment that doesn’t delve nice and deep. From my standpoint, having come off of In The Dark feeling a little crestfallen (though, yes, later that feeling was redeemed when I listened to the experiment), and then coming off of a more delve-y experiment last week and feeling great about it, I feel the same way as you, Jon: I wanna go deep for Out of Bounds.

As per your questions, Paul, I’d like to know if you have any answers in mind, as if those questions were posed to you. I’ve rarely felt comfortable manufacturing (such a strong word I just used!) a Method Template, and often what I like is to allow a Method Template to present itself in a moment of inspiration– either before experiments, or during them, whenever the time comes that any one of us is inspired and communicates that idea to the rest of our team. Of scientists.

I do propose that we be ALL EARS, as in, all ears to our own hearts, and all ears to each other. That way, we can more easily subvert what might be our greatest handicap when we’re all four playing… which… is… giving… each… other… … … … space… … … … to… explore…

This is the video of Twelve. http://www.megaupload.com/?d=8JWRXRTQ
It is like a thing where you have to download it onto your hard drive to watch it.